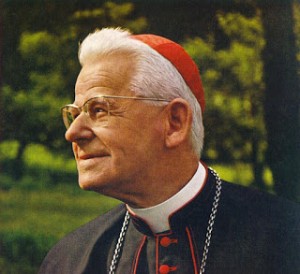 Joseph Cardijn was born on 13th November 1882 at Schaerbeek, a district of Brussels. His parents, Louise and Henri, were caretakers of a small block of flats. His mother suffered from bad health and young Joseph was looked after by his grandmother in Hal, a small Flemish town. A few years later his parents moved to Hal where his father ran a small coal merchants business.

Hal was fast becoming the centre of industrial growth and development. At the time he was about to leave school his parents naturally thought of him taking a job in the factory with the other working class boys of the town but Joseph had other ideas, he wanted to become a Priest.

Cardijn entered the Seminary and began his studies. Not long after this he received a message saying his father was dying. He returned home and on seeing his father who had worked hard all his life, he swore to become a Priest of the working people.

Cardijn was ordained a Priest on the 22nd of September 1906. He travelled the world seeking a solution to the problems facing young workers. He visited the Trade Union Movements and the Scouts but these offered no solution.

In 1916 Cardijn, who had worked actively in the underground since the war started and spoke out against the German armies, was arrested and sentenced to thirteen months in prison. He was to serve another prison sentence in the coming years for similar activities. Cardijn used his prison time to set plans and directions for what was to become the Young Christian Workers.

In March 1925 Pope Pius XI received the founder of the Y.C.W. in Rome and gave the Movement the sanction of the Church.

On the 12th of February 1965 Pope Paul VI consecrated Cardijn as a Bishop and created him a Cardinal for his work with the Y.C.W. On the night of the 24th of July 1967 at the age of 85, Cardijn passed away. Cardijn’s faith and optimism never blinded him to reality and his clarion call was:

Powered by Optimum. Responsive Web Design.
Back to top

This website uses cookies to give you the best possible experience. Some cookies are essential to the running of this website and some are for analytics purposes. You can choose to Accept or Decline the use of cookies. Agree by clicking the 'Accept' button.