Fáilte & Willkommen are the two words that leapt off the welcome poster that greeted our German YCW friends for an exchange at the end of October. A group of five German young people descend on us, for what was to be a very fun and informative exchange between our two movements. 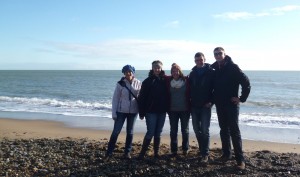 After travelling around Wexford and climbing the Great Sugar Loaf  in Wicklow, they joined us at the YCW Office led by Babsi; who considers Ireland her second home. Babsi is a very active member of the Augsburg YCW and often travels to Ireland, she knows the country better than many who live here.

The first wet morning was all about having a hot cuppa and getting to know one another. The German YCW is divided into regions, which correspond to dioceses. Babsi comes from the Augsburg YCW while Karin, Andrea, Sebastian and Matthias come from the Eichstätt YCW www.caj-eichstaett.de They are all young workers interested in travelling but also very involved in their YCW groups back at home and come from different backgrounds such as studying engineering, working as a chef, in a tax office and a pharmaceutical company. The 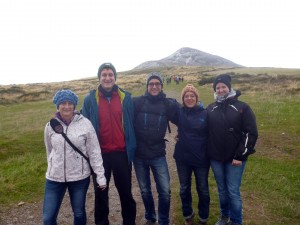 programmes and activities they are involved in are diverse for example accompanying and supporting students, mostly from vocational schools in their career choices and follow up on their progress. At the regular group meetings they use YCW’s method of See-Judge-Act to discuss and analyse issues that affect them as young workers. They organise actions and campaigns against precarious work and support policy making for better work conditions and pay structures, especially for migrant workers. Writing and publishing on youth issues are also important for the German YCW. However YCW is not just all work, it’s also about trips and having fun at summer camps.

Francois, a good friend of the Irish YCW volunteered to spend his time with the group and joined in all the adventures. After the morning cuppa we visited Liberty Hall to learn more about the Irish Trade Union Movement and the Young Workers Network (YWN). Dan and Paddy welcomed us and introduced our German friends to the history and the present work of the Trade Union Movement and the story of 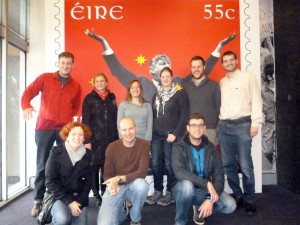 YWN. Unfortunately, because of the rain we couldn’t make it to the roof of the landmark building but we were taken around to see the city from the 12th floor. What a view! After lunch some decided to go to the Guinness Store House to pay a visit to Dublin’s other significant landmark. On their return we had an Irish-German evening in the office having ‘traditional’ Irish pizza with our volunteers Avril and Daniela present. We looked at photos and chatted about the differences and similarities of being a young worker in Ireland and Germany. While youth unemployment might be lower in Germany working conditions and the housing situation are far from ‘perfect’ for the young people in Germany. The grass might seem greener in Ireland (pun intended) as large and small tech companies set up camp here, which is a great ‘opportunity’ for many ICT educated young Europeans while some Irish young people feel left behind as they find it difficult to find work in the community or public sector. YCW and NYCI (National Youth Council of Ireland) are advocating for better conditions for young people struggling to find work in Ireland.

The second day had a lot to offer with visits to two Social Enterprises planned. In the morning the group visited Jobcare a social enterprise of renown and held in high esteem among job-seekers founded and led by Paul Mooney. Paul and his team received us warmly and took us 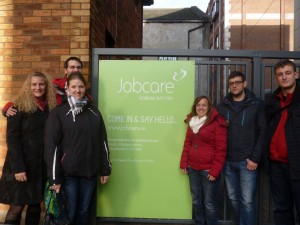 through the story of the organisation which is also his personal story. His organisation has been assisting people for the last twenty years. Their services are varied and help people get close to the fire through mock interviews with high profile companies. Our volunteers Daniela and Alessadro speak with enthusiasm and gratefulness about the support they have experienced there. After a quick lunch we headed to Speedpak, another great Social Enterprise located in the Clonshaugh Business & Technology Park, in Coolock, Dublin 17. Speedpak specialises in customised contract packing, including product packaging and finishing services. By running a viable commercial operation Speedpak provides relevant work experience and training to people who have been out of work for a variety of reasons. John Murphy CEO welcomed us and gave a brief outline of the organisation. Edel Mooney, Development Manager introduced us to the ins and outs of the organisation and the way they support people to get closer to the job market by gaining hands on experience as well as training. They employ over 40 training staff annually who are long term unemployed people living in disadvantaged communities or experiencing social exclusion. They focus on promoting positive work behaviours, developing skills for mainstream employment, rebuilding 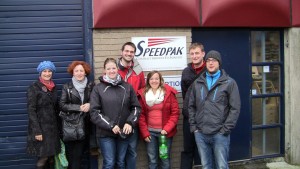 confidence and self-esteem and supporting people to reach their potential. We also got a chance to visit the work floor and were given two lovely rosettes as well.

The German group, while struggling a bit to keep up with the Irish accent, were impressed by the enthusiasm and energy of the social entrepreneurs they met. It was a great privilege to have had the chance to visit these great organisations. After our visits we continued the discussion with a hot coffee/chocolate in the Butler’s chocolate factory. What a day. However, it wasn’t finished because our German friends invited the Irish crowd for some pub grub and we ended up evaluating the exchange visit around dinner and a couple of pints. It was great concluding that our experiences as young people living in Ireland and Germany are not so different and our values of dignity, work, service and support link us as much as ever. German young Christian workers love coming to Ireland, we look forward to their return. We also hope to have a group from Ireland travel over to Germany soon to experience all that the CAJ have to offer.

This message is only visible to admins.

PPCA Error: Due to Facebook API changes on September 4, 2020, it will no longer be possible to display a feed from a Facebook Page you are not an admin of. The Facebook feed below is not using a valid Access Token for this Facebook page and so will stop updating after this date.
Powered by Optimum. Responsive Web Design.
Back to top

This website uses cookies to give you the best possible experience. Some cookies are essential to the running of this website and some are for analytics purposes. You can choose to Accept or Decline the use of cookies. Agree by clicking the 'Accept' button.